Where is the Sound in “Lights, Camera, Action”? 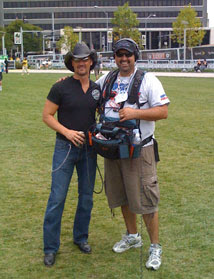 SQP president Tamer Tewfik with a Tim McGraw look-a-like at the NFL kickoff this past September in Pittsburgh.

We started out in this business as location sound engineers for film and television. Professional sound engineering is a very big part of what we do and we continue to do it on a steady basis. Our biggest clients are NFL Films in Mount Laurel and NASCAR Images in Charlotte, North Carolina. The reality episodes are now airing on NFL Full Contact on TruTV, Monday nights at 10pm. 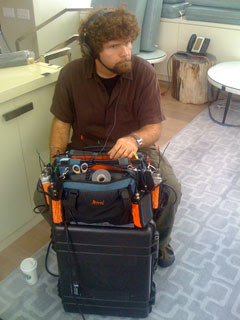 In all the years we have been involved in sound we have worked for almost every major film studio and network you can think of. You have heard the line “Lights, Camera, Action”, right? We ask, “What about the Sound?” Why isn’t sound included in that line? Isn’t sound important? Have you ever had to hit mute on your remote control and watch an emotional scene in a movie? It loses all it’s power. A quality still picture can stand alone to tell a story but add music to a slide-show and it’s 1000% better. Moving pictures are powerless without quality audio.

We have always believed that sound is the most important element in telling “the story”. It is no wonder that there are entire departments in quality production organizations that are dedicated only to producing quality audio and music. It has always been puzzling to me why some of our film interns who have graduated with a degree in film know so little about recording quality audio. We’ve also noticed that some of the smaller production companies we come across are very proficient with their graphic design, animation and camera movement but lack quality sound in their produced pieces. 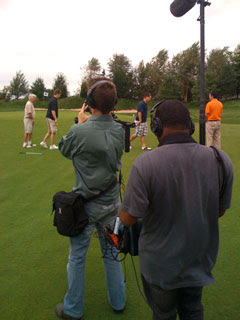 above, SQP audio Engineer Andrew Miller mixing audio for a cameraman during a shoot for Versus.

Achieving quality audio is not just a matter of buying any old microphone and throwing it up somewhere. It is also a matter of knowing which mic to use in each situation. There are many factors to consider: which mic will you use, where will you place it, how is the room or location space affecting your audio? What about external influences and ambient noise like air conditioners, outside construction, or the vocal timbre of the talent, etc. There are also many different mics out there: condenser, dynamic, shotgun (cardioid and hyper-cardioid), lavaliers and different wireless systems. Many different brands at different costs. A good sound-man knows which mic to use in a specific situation and experience in the field is the only thing that can teach you how to make good decisions in the midst of it all. 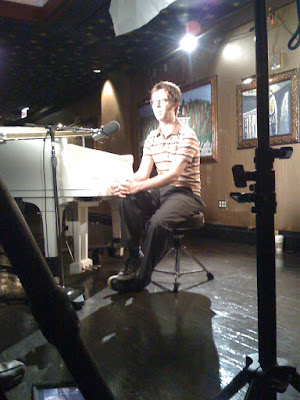 right, Artist Ben Folds during an interview for NFL Films. SQP supplied Ben with special mics specific for his piano and voice.

Quality sound engineers are included in every SQP shoot package that requires audio. If SQP is on the job, you can feel secure knowing that your project will sound as good as it looks. If you have a production crew assembled and you need a quality soundman, you can count on SQP to send you a true professional. All soundmen that we work with have many years of professional broadcast experience. Most have been on the job with us personally. We never send anyone to a job that we have not seen in the field working at a high standard. Contact SQP today to inquire about our first rate sound engineers.