Why We Are Thankful

by SQ Productions on November 16, 2017 in Holidays, Observance 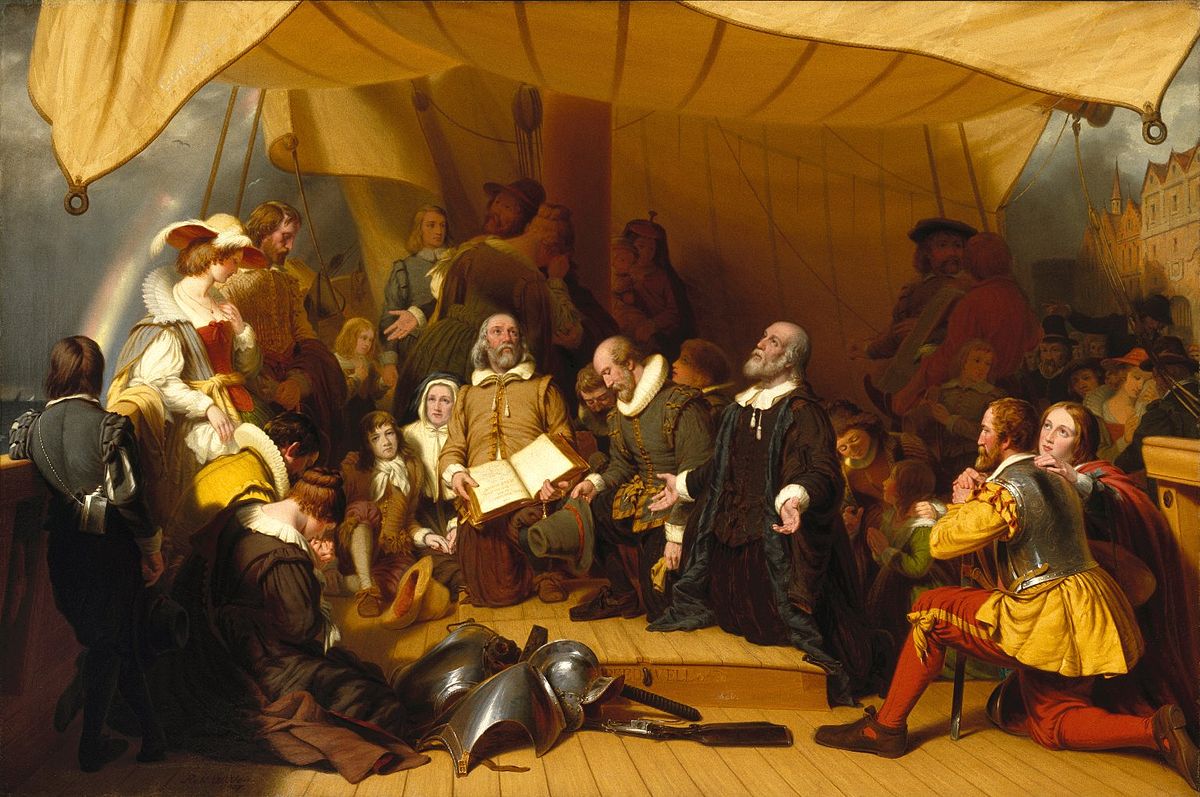 William Bradford, passengers and crew pray for a safe voyage as the Mayflower gets ready to sail in 1621.

In September 1620, a small ship called the Mayflower left Plymouth, England with 102 passengers, lured by the promise of prosperity, freedom of religion and land ownership in the New World.  They were looking to reach the mouth of the Hudson River, but after 66 treacherous days, they dropped anchor near the tip of Cape Cod, far north of of their original destination.  They wasted no time, immediately establishing a village at Plymouth.

Only half of those that made the journey on the Mayflower’s lived to see their first New England spring.  In March, the new settlers, later known as the Pilgrims, were astonished to receive a visit from an English speaking Abenaki Indian.  Seeing that the Pilgrims were suffering from malnutrition and illness, the Abenaki tribesman returned with another Native American named Squanto, a member of the Pawtuxet tribe.  Squanto taught the settlers how to grow corn, catch fish in the rivers, extract sap from maple trees, and avoid poisonous plants. He also helped the settlers forge an alliance with the local Wampanoag tribe, which would endure for more than half a century.  Tragically, this alliance still remains the only historical example of a harmonious agreement between European colonists and Native Americans.

The Pilgrims’ first Governor William Bradford, elated over their first successful corn harvest, organized a celebratory feast and invited their Native American allies, including the Wampanoag chief Massasoit.  The celebratory feast lasted three days, and although the Pilgrims did not use the term “Thanksgiving” at the time, this initial feast is remembered as America’s “First Thanksgiving”.

No record exists of modern menu items like turkey or pumpkin pie.  We have no record of any menu items, aside from Pilgrim chronicler Edward Winslow’s journal in which he wrote that Governor Bradford sent four men on a “fowling” mission, and that the Wampanoag arrived bearing five deer.  Because the Pilgrims had no ovens, historians suggest that the dishes were likely prepared using traditional Native American spices and cooking methods.   It is also likely that the Mayflower’s sugar supply had dwindled by the fall of 1621, so desserts like pies and cakes, which are now Thanksgiving staples, were probably out of the question.

During the next 200 years, “days of thanks” were celebrated by individual colonies and states.  In 1789, George Washington issued the first governmental Thanksgiving proclamation, calling upon Americans to express their gratitude for the favorable outcome of the country’s war of independence and the successful ratification of the U.S. Constitution.

Several northern states began to officially recognize an annual Thanksgiving holiday, but each celebrated it on a different day.  In 1827, the southern writer/editor Sarah Josepha Hale, and author of the nursery rhyme “Mary Had a Little Lamb”, took it upon herself to establish Thanksgiving as a national holiday.  For nearly four decades, Hale published numerous editorials and sent multitudes of letters to several governors, senators, presidents and other influential politicians.

Of course, Abraham Lincoln was the one to heed her request in 1863, during the peak of the Civil War.  In his proclamation, he entreated all Americans to ask God to “commend to his tender care all those who have become widows, orphans, mourners or sufferers in the lamentable civil strife” and to “heal the wounds of the nation.”

Lincoln scheduled Thanksgiving for the final Thursday in November, and it was celebrated on that day every year until the Great Depression in 1939, when Franklin D. Roosevelt moved the holiday up a week in an attempt to help the economy.

Roosevelt’s plan was met with tremendous opposition, and in 1941 he reluctantly signed a bill permanently placing Thanksgiving Day on the fourth Thursday in November.

Many citizens, especially Native Americans, feel that the story of Thanksgiving is often not an accurate portrayal of the long and bloody history of conflict between Native Americans and European settlers.  Some gather at the top of Cole’s Hill on Thanksgiving, which overlooks Plymouth Rock, to commemorate a “National Day of Mourning.”

However you view Thanksgiving, you can not deny that the commitment to the settlers by the Native Americans is inspiring.  Squanto had it tough.  He had been previously kidnapped by an English sea captain, sold into slavery, escaped to London and returned to his homeland through an exploratory expedition.  Instead of letting the Pilgrims meet their demise through sickness and starvation, he offered to teach them his traditional ways.   He knew instinctively that any child of Mother Earth is deserved of this help, regardless of color or creed.

On Thanksgiving, we give thanks for many things – our families, homes, employment or health.  I am thankful for my clients and to be lucky enough to do something for a living that I am passionate about.  I’m also thankful anyone who has read this far, but especially, I am thankful for Squanto.  We need more people like him on this earth.  Happy Thanksgiving.

I will care about those in my community so that the mind changes, alcohol and drugs, will vanish, and our communities will forever be free of violence.
If each of us can do all these things, then others, will follow; ours will be a proud community.

Watch the video below for more interesting facts about Thanksgiving!

← Remembering Those Who Labored
Adding Links to Your YouTube Videos →